So I have been working on a personal story for about 3 years now since I was in high school, but it wasn't until now that I have actually started concept design for characters. All the time before was dedicated to getting the story fleshed out and I think it's in a stage where most of the essentials are down.

I made a series of silhouettes to get the general form of mechas that will appear in the story. There will be generic designs for normal government issues as well as more customized designs for specific characters in the story like the Pope. 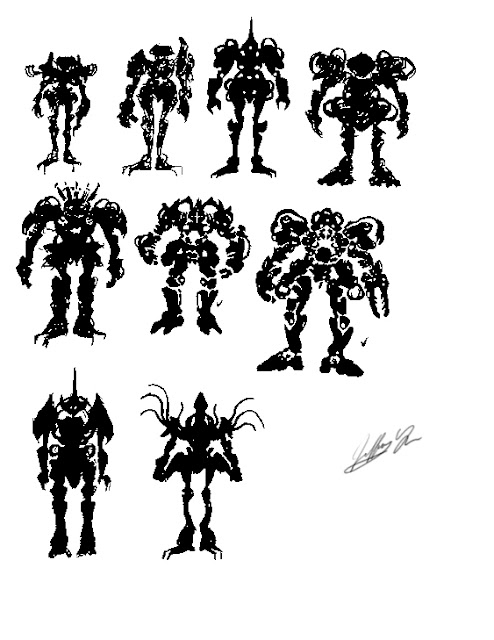 I made sure the designs had some sort of thematic quality to them such as the body shape made from triangles and circles to hint at the gracefulness and the danger each model presents.

I kinda liked the thin frames because it has such a huge contrast from the bulkier look. That might be why I liked Evangelion designs. One of the main thing my story focuses on is the advent of psionics and the ability to amplify electromagnetic waves generated by the brain. The mechas must have a way to generate energy to power the psionic device. So I decided to use the circular structures on the back of the mechas as chargers which absorb electrons and other energies in this sci fi world to replace energy lost during psionic discharges. I really liked the design for the Pope's mecha (pope mobile XD) which has the weird tentacles coming from it. I refined the details for the silhouette.


So this is the design I have come up with. It is a mecha with one face, but it is a mixture of two drama masks, one smiling, the other sad. I played around with other mask ideas but I thought the dual masks represented the dual nature of the Pope thus reinforcing symbolism and making the design more iconic.
Posted by Jeff Yu at 2:45 AM No comments:

Hey Guys, I just submitted my Sketch Challenge for Wolverine at the Temple of Cartoon Mojo: