Hey everyone! Today I am posting my value studies for the selected silhouettes from last week's post. My theme is smuggler and law men in space.

I am really liking the smuggler's asymmetrical design because it enhances his villainous qualities. He starts off as a black and white character but gradually becomes morally grey as he betrays the people he works for. I kinda liked the scaled plates since they remind me of a snake or serpent which illicit a strong connotation of villany, but I felt that the one with the bamboo-like armor represents a more slapdash assortment of items. The story is designed for a game so the character should be customizeable which means this character is a stock character (the character players start off with before they customize him/her). In the final design I will make him modular once I have the design for the props completed. So stay tune for the final illustration!

The lawman was giving me some problems in the beginning because I wanted something tough but also space worthy. My initial designs featured a man in a powersuit with armor reminescent of judge dredd. As i designed more and more, logistics made it seem odd as to why a law man would be wearing such bulky armor. The concept of armor is more for mercenaries and soldiers rather than a lawman. As a result, I turned to more down to earth references like SWAT and rangers which I feel yielded better results. The final value study depicts the law man with an open jacket with a badge, shin guards and elbow guards for roughin' it, and his wide brim hat. Since the character has an open jacket, he seems rather relaxed so to keep the idea of some professionalism, the hat is designed to look straight and stiff. I will be doing some value studies next week so wait for more to come!

Hey everyone, we are in week 13 of the SCAD Concept Art Factory Club sketch challenge. Usually we do a speed paint but this time we want to focus on design rather than the illustration aspect of Concept Art. All good concept art pieces start off with that nugget of idea which we develop into quick drawings called Silhouettes. In the silhouette stage, we try to use surface shapes to develop the personality of the character we are trying to create.

This week, members of the club choose any sort of theme they want, whether it is robot wars, or space western. They then choose two characters from the story they have developed and create as many thumbnails as they can in the 90 minutes period. For my theme, I chose Space Western with Asian theme.


The two characters I will be developing are the smuggler and the lawman.

When I started designing the smuggler, I thought about clint eastwood and the stereotypical bandito from western films. They usually wear the iconic poncho and hat. I took the idea of the poncho, but changed the sombrero to the asian bamboo straw hat. I also made sure the poncho covers only a portion of the body to make the silhouette look asymmetrical. The smuggler in my story is a lone wolf and is dangerous so the asymmetry makes him look less orderly and more chaotic. I chose the snake as a motif for the character because the poncho creates a silhouette similar to the hood of a cobra. The contrasting creature to the cobra would be the eagle. 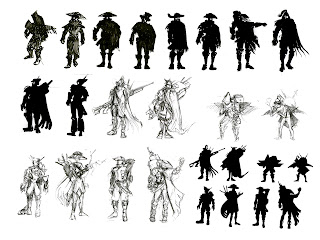 For the Law man, I wanted to use the eagle motif as a contrast to the smugger's cobra. I also remember judge dredd with eagle wings as the shoulder pauldron design. I initially tried some armors but the lawman ended up looking very much like mercenaries and soldiers than "lawman". Robo cop didnt work either because he looked more soldier than lawman. That's when I remembered the rangers from Fall Out had armor and the cowboy hat so I took that idea and ran with it. 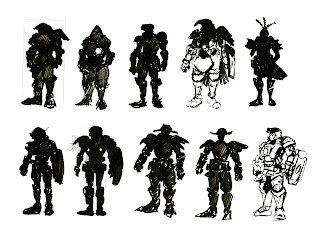