Hello everyone, here is another piece of art I did for the new Dark Age Skarrd faction update. This time I was asked to update the art for the Bolas unit from the game. Bolas is the basic skirmish infantry that takes the brunt of an assault to lock down enemies and chip away at health until the stronger units can get into position to clean up.

The Bola sports a rusty blade that is simple but deadly when used in numbers with others as a group attack. They also carry their signature weapon, the razer bladed bola to slow down or knock prone their targets to make them easy pickings for the Skarrd Horde. Like the Harpies they are able to infiltrate the battlefield at any moment's notice to turn the tide of battle through capturing objectives, locking down larger units, or add bulk to a depleted army. 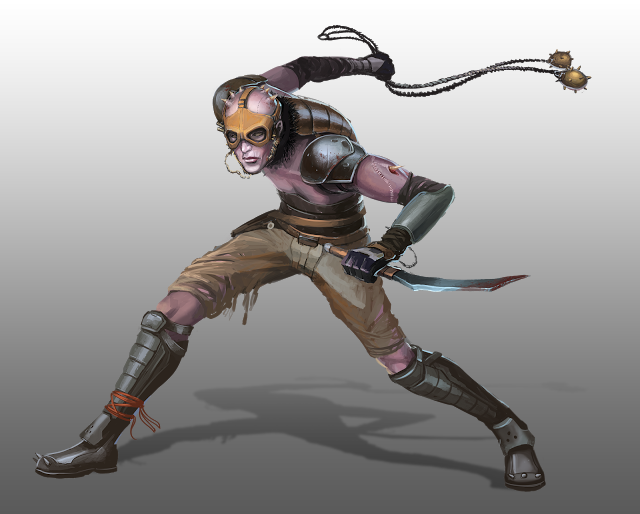 Posted by jeffyuart at 3:44 PM No comments:

Back in May I created some new artwork for the new Skarrd Faction book for the Dark Age tabletop game. Some of the older miniatures received updated sculpts and new concept art. Here is one of the pieces I did for the Harpy. These ladies are agile, highly mobile units designed to take objectives, enter the field in strategic locations to assassinate isolated units or create a distraction. Their low point cost also means you can pick up a large group of them so you can swarm the field at the opportune moment.

For more information please check out: http://dark-age.com/ to learn how to play. You can purchase your very own Harpies HERE. 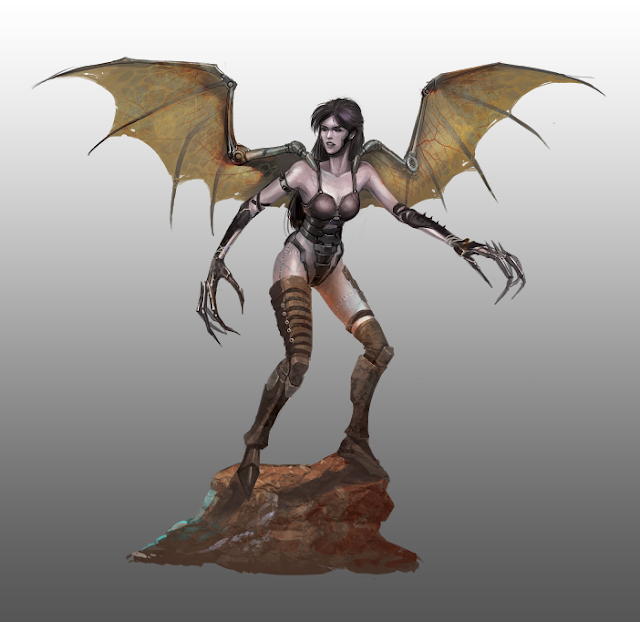 Posted by jeffyuart at 11:42 AM No comments:

Did some icon art for the Rum & Bones: Second Tide ship tile.


Posted by jeffyuart at 5:12 AM No comments:

So I was searching my hard drive and I came across artwork I made for a friend's wedding invitation. For context, my friend Jonathan Phillips-Bradford commissioned me to create a piece of artwork the features him and his then fiancee Elizabeth Beckley as chibi characters in an epic battle with a dragon. Art work took me about a day or two to complete, the style was based on the game Arcadia Quest by Cool Mini Or Not.

Posted by jeffyuart at 4:48 AM No comments:

Have You Eaten Film- Glazed Honey Sweet and Sour Pork

Today I present to you honey glazed, sweet and sour pork. Notice the brownish red glaze and the juicy sauce pooling below. How tantalizing.


Posted by jeffyuart at 4:55 AM No comments:

Hey Everyone, decided to do a more detailed speed paint study tonight. Spent around 2 hours along with another 30 minutes to polish.

Be wary of the Cassowary!

Posted by jeffyuart at 1:30 AM No comments:

Started on a sketch of a witch doctor while on a hangout call with some friends, Nicholas Palmer, Tim Kafantaris, and Jeremy Cropp.

Posted by jeffyuart at 11:53 PM No comments:

Time for an introduction for another faction from the Dark Age miniatures table top game line! Today I present to you the raider-like bandits from the wastelands of Samaria called the Outcasts. Like the Forsaken, they are one of the humanoid factions but they do not bend to the rigid laws set by the Prevailers. Instead of paying taxes and fighting in the arbitrary crusades set by the zealous council, the Outcasts prefer to fight for their own land and destiny. 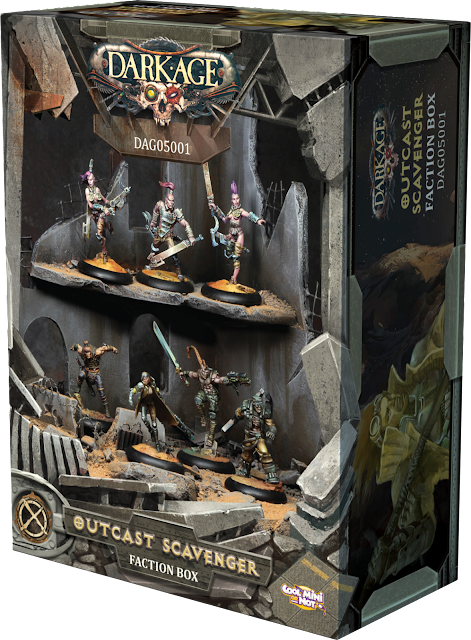 The Outcast Faction Box has what you need for your bread and butter army to play a 500 point game. I designed the box based on concrete slabs and rebar scene in the post apocalyptic world of the Fall Out and Mad Max franchises. The Outcast is known for its fast moving, hit and run tactics. Though they have heavy hitters like the Brutes, they play off control abilities to give themselves an advantageous position, or apply status effects.

This box features the following models: 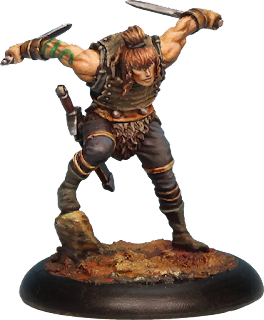 Blades is part of the Bounty Hunter faction meaning he can fight for both the Outcast or the Forsaken. He is a pure melee unit that deals rapid damage with status effects such as bleed, blind, and stun to debuff enemies. He gains bonuses from charging into enemies, and simultaneously can negate any attack bonuses (charge and gang up) of attackers when defending. Thanks to his agility he can also deflect any 1 non-template ranged attack if he succeeds on his saves. His whirlwind attacks is a powerhouse if he can catch groups of enemies off guard. 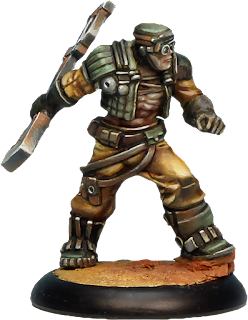 The Fixer is a must have for any Outcast band that have ranged units because he can negate malfunctions even after he is killed in battle! He can provide your units with scavenge counters which are basically useful items jury rigged from scraps on the battlefield. Scavenge counters provide offensive and defensive boosts to units. The Fixer is also able to heal units on the field with his Medic ability.

His utility makes him a target on the battlefield so be sure to keep him alive with bodyguards like the Wasteland Warriors. 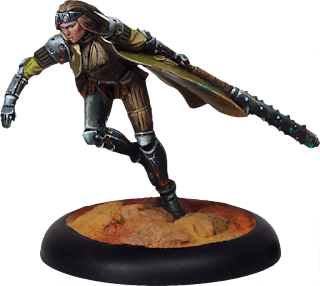 The Warchief is a veteran of survival in the wasteland, have proved himself through cunning tactics and martial abilities. As a result he is the commander of your army, so be sure to have other units squadlink with him to push objectives or combine attack to overwhelm stronger enemy units.
His melee attacks can deal area of effect damage which is useful when fighting swarms of enemies. His ranged Enforcer Pistosl help chip down enemies from afar while his entourage charges into the fray. 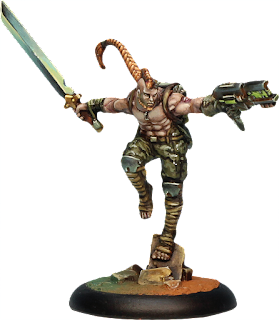 The Manhunter is one of your specialist units meaning he works on his own and therefore cannot squadlink with other units. His go it alone nature allows him to sneak onto the field, single out enemies, and personally take care of them.
Both is sword and ranged pistol attacks can paralyze opponents, making them less effective on the battlefield. As a resourceful survivalist, he can always find something from his surroundings to use in order to stay alive. As a result, he often acquires scavenge tokens to help him gain an edge over his targets. 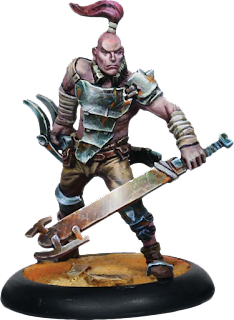 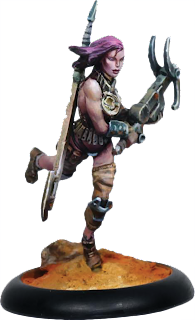 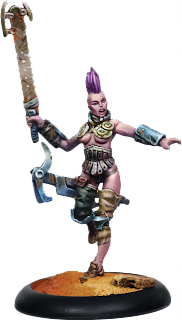 The Wasteland Warriors are your bread and butter line infantry who enters the fray in melee, or whittles down foes from afar. While they do not hit hard alone, a group can easily overwhelm opponents through advantageous positions. Their zip guns are extremely useful in forcing opponents out of position. With the ability to pull a foe away from their group, the warriors can isolate targets for the Outcasts to swarm and eliminate.

There are more boxes coming out for the Outcast in the future. Some give you additional troops to supplement your army. For example, the Brute Box will provide you with some heavy hitters who can also tank for your units. This gives your a wider range of tools to play with to help jury rig your way to victory.

Posted by jeffyuart at 2:45 AM No comments:

Have You Eaten Steamed Fish with Green Onion and Sliced Ginger

I hope you are hungry! Today I present to you steamed fish!

So this one is a bit more complicated because I have so many components to create before putting them together into a dish. Like cooking in real life, I needed to prepare the ingredients.

And now, we combine all the ingredients together into something scrumptious! I have to take the garnishes and duplicate them a couple times, then reorganize the composition over the elongated plate.


Tune in for what else is cooking in the kitchen!

Posted by jeffyuart at 12:10 AM No comments:

Have You Eaten Shumai Design

I just completed a shu mai dish for Marisa's thesis film. The process started with me painting the shu mai in photoshop and then bringing it into illustrator to vectorize. Afterwards, I duplicated it and arranged it on the plate I created.

Have You Eaten Plate Design

Hi all, I recently started working with Marisa Tontaveetong on her thesis film called "Have You Eaten", a documentary/biopic about family life between her mother and aunt. Food, culture, and personal growth are central themes to this journey, and I will be helping her bring her vision to the screens.

I have completed the plate design that will be seen through out the introduction.

The plates are created in an octagonal format because the designers fabricating the geometric pieces will be shaping my creations into an origami like form in 3D but with a texture wrap around.

Posted by jeffyuart at 11:44 PM No comments: