So I finally added color to my value study for the Neverending story environment concept. The swamp is suppose to be sparse and rocky and I wanted the rocks to mimic the shape and texture found on Morla. At this point I am going to populate the world with more dead trees to give it that swampy feel. I'm pretty happy with the steamy feel, it just needs more trees and background clouds. 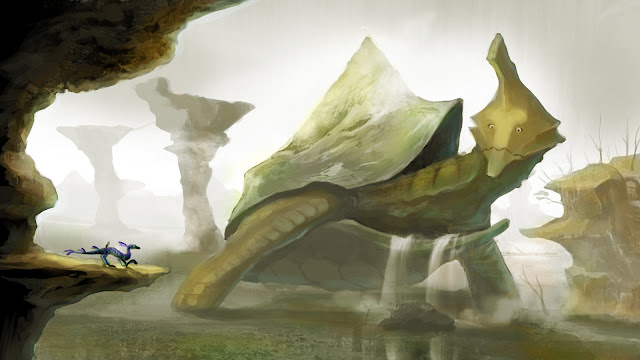 Recently I started hanging out with a group of friends who got me into playing a game called Rifts. It is similar to the D&D board game format. It blends Sci Fi elements with Fantasy which I think is really cool. There aren't many games that merge magic, which is seen as having unlimited power versus technology with a perceived power limit.

The game is not just about combat mechanics; it is also about the interaction between the characters. In many cases, players become attached to the characters they play similar to the way how an audience sympathizes with the protagonist and antagonist of movies or video games. The Rifts session has been extremely helpful in getting me into the psychology of how each character would act in different situations.

Today I am uploading my first character from the game called WG-GLE-5 a full conversion cyborg affectionately called "Mr. Wiggles". In the game, he wakes up from a deep slumber after having been deactivated for some time. He joins a group of intrepid adventurers to pass the time and make a living, all the while he tries to figure out who he is and what happened to him before his awakening.


Apparently Mr Wiggles had a tragic past where he lost a loved one during an attack by the Coalition States, a human centric organization bent on ridding the Rifts world of dimensional beings who they deemed below the human race. The protagonist was also hurt during the attack and left for dead with fatal wounds until a third party organization turned him into a cyborg. It turned out that he was created to fight against the coalition. For some reason, he has been deactivated for a while, it was presumed his old team were wiped out by CS forces, and has been put into safe storage to avoid the CS from completely destroying all the combat cyborgs made to take down their regime.

I have selected one of the compositions from my previous sketches. This shot is going to be more cinematic than something dynamic and energetic. It is for establishing location and scale of the characters.

Hi everyone, sorry for the long wait between each project from the Neverending Story. I have been swamped with work at my internship. I am posting up some concept sketches I did for the environment I want to put Morla in. I tried a few story telling shots along with some that are more cinematic.