The United Worlds were conducting numerous illicit experiments on the planet of Samaria and among those were genetic engineering. Scientists recombined genes of known terrestrial creatures with those of alien lifeforms found on the planet and its surrounding moons. Many of these experiments results in horrifying abominations that possessed amphibian and reptilian characteristics. Specimens grew tentacles, sharp claws, hardened chitin plates, and in some reports- psychic abilities.

After the hasty departure of the United Worlds corporation, the experiments escaped into the wild to swamps dotting the polluted rivers in southern Samaria. There they have created hive cells that answer to the Broodmere.

The updated logo for the brood still bears the biohazard icon used in the legacy version of the faction logo. The logo now looks radioactive especially when placed on a brown rusted barrel to evoke the feeling of nuclear waste in a metal barrel. 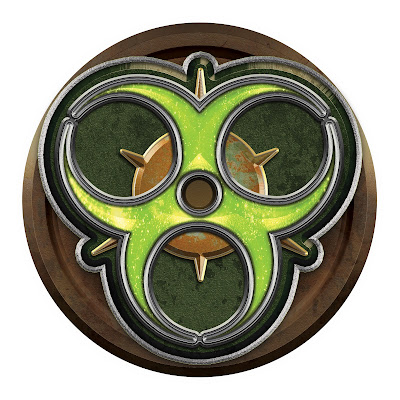 Posted by jeffyuart at 5:03 PM